Image is truly powerful. We, humans, are visual creatures. We tend to make a judgment based on what we see. Most of our decisions are made through looking at things. Judging by appearance is the quickest and most convenient way to create a decision. As this might be the case, judging by what we see can sometimes be flawed. This is certainly what Samuel learned when he was asked by God to seek for a new king of Israel.

The search for a new king

After God rejected Saul, he directed Samuel to look for a new king. Samuel was led to the house of Jesse who has seven sons. Jesse was asked by Samuel to present his sons so that he can choose the next king of Israel.

Jesse first presented his oldest son, Eliab. It is most likely that Eliab possesses great looks and the stature fitting of a king. Samuel quickly notices it to the point that he said, “Surely the LORD’S anointed is before him” (I Samuel 16:6). However, God does not approve of Samuel’s judgment. He said to Samuel a statement that all of us should take heed.

“Look not on his countenance, or on the height of his stature; because I have refused him: for the LORD sees not as man sees; for man looks on the outward appearance, but the LORD looks on the heart” (verse 17).

This is a great reminder of Samuel. Of all the people, it should have been Samuel who knows that appearance can be deceitful just like in the case of King Saul, whom God rejected. The nation of Israel did not have a hard time accepting Saul as their king because, based on their standards, he looks like a king!

God did not approve Eliab. So Samuel asks Jesse to present his other sons. One by one, none of them is chosen. To the disappointment of Jesse, he was left with no other choice but to also bring his youngest son, David. 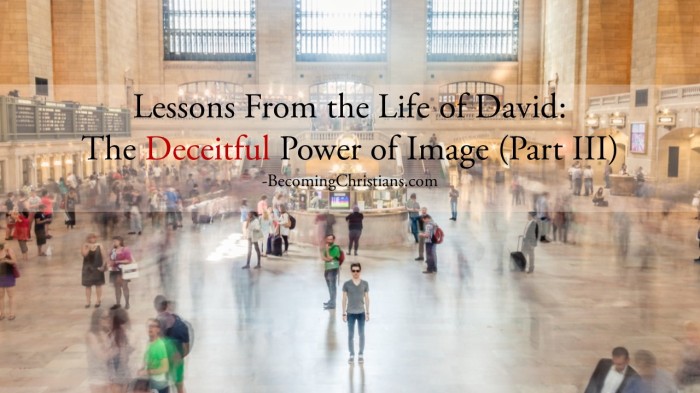 David, the future king of Israel

It is quite interesting how Jesse and his family treated David. Though his name means beloved, it is certainly not how people see him. We know that there is a sacrificial ceremony or maybe, even a feast in Jesse’s house (I Samuel 16:3). All of the sons of Jesse is present except David who was left to keep the sheep in the field.

David is the youngest son of Jesse and he is probably also the least favored. He is not dimmed worthy enough to be present in the sacrifice made by Samuel. Maybe because his family did not recognize the full potential of David or did not see his true value.

God often exalts those who are humble and of a contrite spirit. Indeed, “God resists the proud, but gives grace to the humble” (James 4:16). This is an encouraging characteristic of God for those who have always been persecuted and have suffered a great deal of discrimination.

Humility is truly one of the needed requirements for God’s servants. God cannot use proud and conceited people for they do not recognize the need to rely on God. This is truly evident in the life of Moses, Jacob, Joseph, and other servants of God.

Samuel said to Jesse, “Send and fetch him: for we will not sit down till he come hither” (verse 11). In a quick turn of event, a person who is considered as dispensable by his family is now the principal guest of the feast. Samuel puts honor on David that they will not eat until David will arrive.

Jesse sent for David and when he arrived, the Bible described him as “ruddy, and withal of a beautiful countenance, and goodly to look to” (verse 12).

Even if David is the handsomest man in all Israel, if he doesn’t have the right attitude and character, God will still not choose.

David is a fine and good-looking young man who has a natural charm. Now we might think that God might be contradicting Himself since He said earlier not to look at the appearance. Needless to say, God sees the heart of David and did not base his judgment on how David appears. Even if David is the handsomest man in all Israel, if he doesn’t have the right attitude and character, God will still not choose.

God immediately commanded Samuel to anoint David to be the next man on Israel’s throne. From here, we read more stories and accounts in the life of the greatest king of Israel.

There is no doubt that we don’t have the ability to make a perfect judgment. As long as we are human beings flawed with our on human nature, we certainly are bound to commit mistakes.

Jesus commanded us to “Judge not according to the appearance, but judge righteous judgment” (John 7:24). We might see the outward appearance of the behavior of a person but we just don’t have the ability to look into the heart and every intent of each action.

As this might be the case, Jesus tells us to make a righteous judgment and this can only be done through the word of God. The Bible reveals to us the criteria on how we should judge but not to the point of condemning people. That’s never our prerogative. God is the only One who is in the position of making that final call.

As Christians, we must not let appearance deceive us. We need to look into the heart of the matter and seek God’s help when we need to make judgments and decisions in our lives.

Proverbs 18:13 tells us, “He that answers a matter before he hears it, it is folly and shame unto him”. It is, therefore, crucial for us to gather as many information as possible before making a decision. We must never base our decision on mere and unstable emotions.

Nurturing the beauty within us

David possesses the beauty that matters most to God. This is the inner beauty, something that people don’t see with their eyes. Sad to say, most people are more concern at how they look in the outside rather than how they look on the inside.

Obviously, I am not saying that we all need to concentrate on how we develop our inner beauty so that we don’t even bother anymore to groom ourselves. The point here is that if looking physically beautiful is your primary concern, then you are doomed to fail in your Christian walk.

As Christians, our priority is nourishing and keeping our inner beauty. This can only happen when we continuously stay close to God through prayer, Bible study, fasting, and good works. These are like the spiritual “makeup” that makes us beautiful in the inside.

II Corinthians 4:16-18 (GNB): “For this reason we never become discouraged. Even though our physical being is gradually decaying, yet our spiritual being is renewed day after day.  And this small and temporary trouble we suffer will bring us a tremendous and eternal glory, much greater than the trouble. For we fix our attention, not on things that are seen, but on things that are unseen. What can be seen lasts only for a time, but what cannot be seen lasts forever.”

So why should we invest our time and energy on the things that fade and will never last?

God puts great importance on how we look on the inside. The Bible teaches us, “Your beauty should consist of your true inner self, the ageless beauty of a gentle and quiet spirit, which is of the greatest value in God’s sight” (I Peter 3:4, GNB).

We, Christians, are called to be a pleaser of God and not a pleaser of men. Just like David who did not put too much importance on how he look, we must also concentrate on developing our own skills, talent, intellect, and character which God value the most. At the end, the character we develop during this lifetime will endure until the time Jesus returns here on earth.