Often times, when we are in our strongest, it is the time when we are in our weakest spiritually. This is certainly true to David. At this time, David is enjoying a prestigious role in his kingdom. He is now the king of one of the mightiest and wealthiest kingdoms on earth. Things are going well with him and blessings are set to continue pouring in. With David intoxicated with unbroken successes and physical accomplishments, a spiritual danger is looming just around the corner. 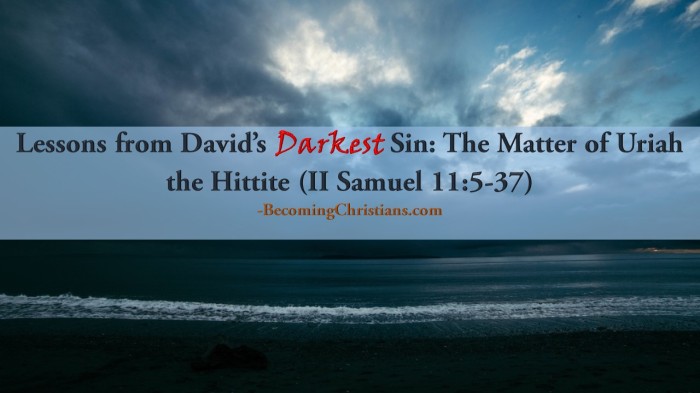 In II Samuel 11, we are introduced to the time when kings were to go forth to battle. But instead of David going to the battlefield, he saw himself to be too important to unnecessarily expose himself to danger. This is not the David that we know as we read the previous account about his life. So he just stayed in Jerusalem and let Joab handle the war against the Ammonites.

David, who was the ruler of an entire kingdom, could now not even rule his passion. He was overtaken by his lust and went into Bathsheba.

During the night when he had nothing to do, he went to the palace roof and there he saw Bathsheba taking a bath in her house. David, who was the ruler of an entire kingdom, could now not even rule his passion. He was overtaken by his lust and went into Bathsheba.

The sin of adultery quickly led to an unwanted pregnancy. Instead of confessing his sin and repenting, David devised the unthinkable! He made a plot to kill the husband of Bathsheba, Uriah the Hittite. Together with other conspirators, Uriah was killed in the battlefield.

This is truly one of the greatest sins of David. Uriah is a gentile and a Hittite who eventually came to worship the God of Israel. He is among the most faithful servants and soldiers of David. However, we have seen how David repaid Uriah’s loyalty. Instead of thanking Uriah, David betrayed him.

This is the type of sin that David committed. His sin surely has not just affected him but also the people around him.

David broke a lot of God’s commandments during this episode. At first sight of sin, David should have stopped it from there. Because of pride, David decided instead to conceal his mistake rather than to face humiliation and disgrace in the eyes of his people.

Humility is required for us to truly repent of our sin. David lacks humility that led him to commit other sins to cover his previous sin.

First of all, David broke the tenth commandment when he coveted the wife of his neighbor. Since he cannot contain his lust, he stole his neighbor’s wife, thereby breaking the commandment against stealing. He then broke the ninth commandment to conceal his sin by lying and deceiving people. David, as the king of God’s nation, should have been the representative of God. But he profaned God’s name by committing heinous crimes. This has led him to break the third commandment that says, “Do not use God’s name in vain”. Finally, David broke the commandment, “You shall have no other gods beside me”. David has no doubt made his lustful desires a god rather than making God his first priority in life.

David thought that he has gone away with it. He thought that he is now safe and his problem is solved by having Uriah killed and marrying Bathsheba. He could have fooled many people but he could not have fooled all people at the same time. Surely, the nation of Israel is now suspicious of all that has happened throughout the past months.

He could have fooled many people but he could not have fooled all people at the same time. Above all, He could never fool God.

All of these could have been avoided if only David repented the first time he sinned. Repentance truly demands humility and that is something David lacked during this time. His pride won’t let him face the humiliation he would experience if he will reveal it to his people. But as what we have seen in his life, the more you hide a sin, the more it will show up.

Today, not only the nation of Israel knows about the sin of David but the entire world. II Samuel 12:12 said, “You sinned in secret, but I will make this happen in broad daylight for all Israel to see” (GNB). Instead of having that problem be contained during his lifetime, the record of David’s sin is now written in the Bible for everyone to see! Imagine when we see David in the kingdom with the knowledge of his scandalous sin against Uriah and God.

Sin can be erased but not its consequences

Through the prophet Nathan, David has come to his senses. He came to realize that he committed a monstrous sin that should have been repented of a long time ago. This is the difference between David and Saul. Instead of looking for someone to blame or rationalize his sin, David accepted his wrongdoing and quickly admitted how far he has gone from the righteousness he once had.

We have seen the heartfelt and touching prayer of David in Psalms 51. David is so sorrowful and he regretted all of what he has done. He fervently asked God to wash him thoroughly and cleanse him from his sin (verse 3). He prayerfully prayed to God to create in him a clean heart and renew a steadfast spirit within him (verse 10). He was afraid that God would cast him away from His presence and take away the Holy Spirit from Him (verse 11).

God is undeniably the God of mercy but let us not forget that He is also the God of justice.

When we read of the sin of David, we certainly can say that it is a sin that is very difficult to forgive. Some people who have lost their loved ones in the same manner as Uriah might even consider this as unforgivable.

Thankfully, God is ever gracious and merciful. All we have to do is to repent and turn from our wickedness. When we do that, God is always ready to forgive. The Bible tells us in Psalms 103:11-14:

“For as the heavens are high above the earth,
So great is His mercy toward those who fear Him;
As far as the east is from the west,
So far has He removed our transgressions from us.
As a father pities his children,
So the Lord pities those who fear Him.
For He knows our frame;
He remembers that we are dust.”

Truly man repents and God forgives. This is certainly true with David. Nathan encouragingly said to David, “The LORD also has put away your sin; you shall not die” (2 Samuel 12:13). However, as sorry as David may have been and God forgiving him, he has to suffer the consequences of his actions.

God is undeniably the God of mercy but let us not forget that He is also the God of justice. If He forgives David his sin and cancel all the consequences of his actions, then it would appear that God is tolerating David’s sin and He is playing favoritism. God lets justice reign in Israel.

II Samuel 12:10-12 listed all the consequences of David’s sin. His family will experience infighting and bloodshed; adversity will plague David’s family caused by his own children; and his wives would be taken away from him and they would be defiled in public. In addition to this, his son to Bathsheba will die. There is no doubt that all of these consequences will be fulfilled during the rest of David’s life.

David enjoyed a moment of pleasure and now, he has to endure a lifetime of reaping the consequences of his sins.

We must remember that God hates sin because He loves us. He knows the consequences of sin and how it could be very painful not just for the sinner, but also the people around him. David enjoyed a moment of pleasure and now, he has to endure a lifetime of reaping the consequences of his sins. We must realize that the pleasure brought about by sin is never worth it.

In David’s life, we have seen how easy for a Christian to drift away from his moral standards. Just a small compromise and letdown can easily lead to bigger problems. As Christians, we need to learn these lessons and consistently stay close to God, whether we are enjoying His blessings or enduring a trial.

We can still have the confidence and comfort that God is merciful and no sin is too great that God cannot forgive.

Sin can be so destructive. No matter how small a sin is, it comes with a penalty. Let us not deceive ourselves that we can escape the consequences of our sins. Time will come when “God will bring every deed into judgment, including every hidden thing, whether it is good or evil” (Ecclesiastes 12:14).

Finally, we can still have the confidence and comfort that God is merciful and no sin is too great that God cannot forgive. No matter how big or small our sin, when we come to God’s Mercy Seat and Throne of Grace, we have the assurance that God will forgive us. As this might be the case, let us also do our part in the process of repentance.

It is my sincerest hope that we learn these lessons from the life of David’s darkest sin. Let us put into practice these lessons and become better Christians in our Christian journey. 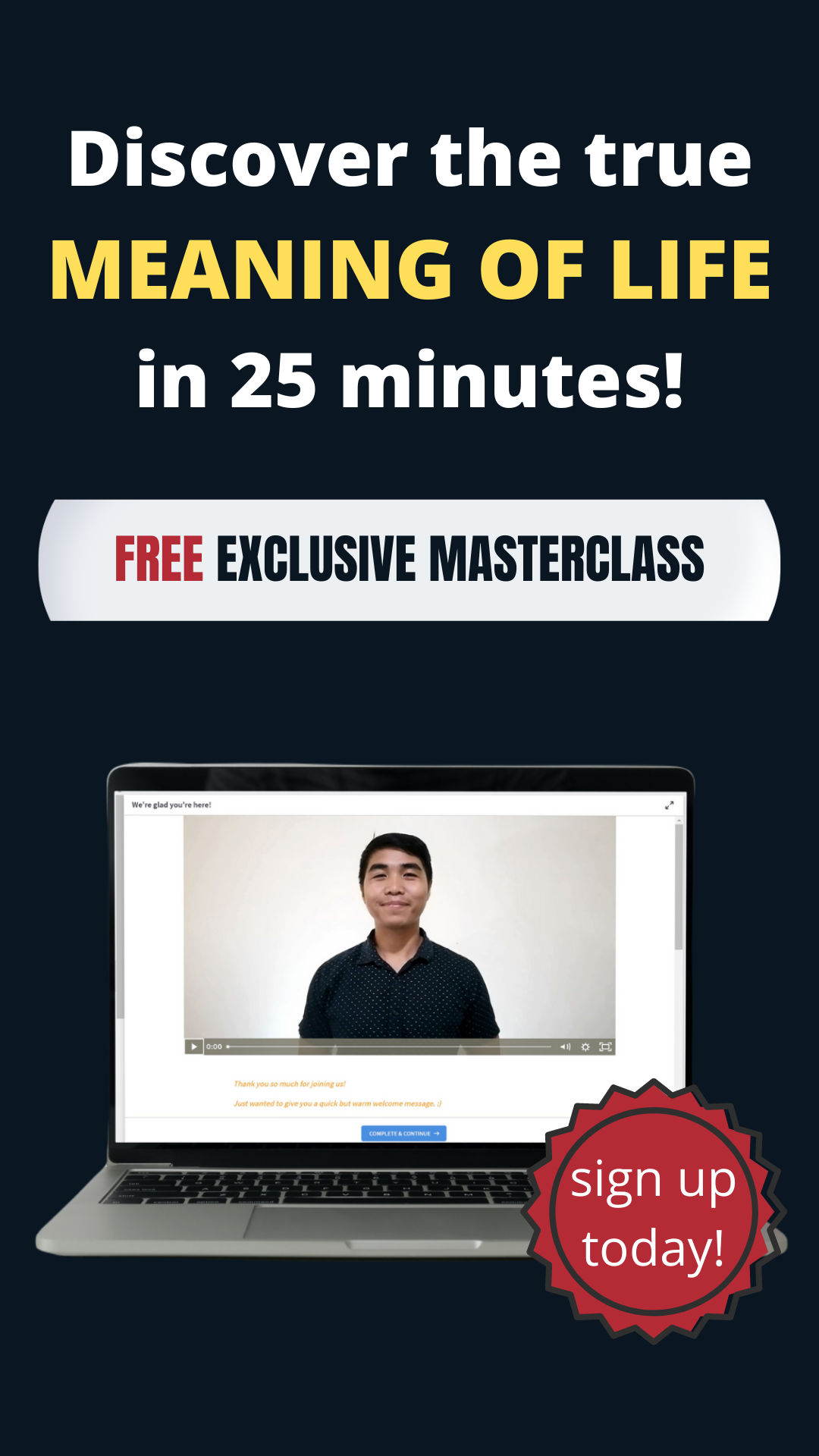