The story of David and Goliath is among the most popular stories in the Bible. Much more than a children’s story, the incidence of a young man defeating a formidable enemy teaches us, Christians, very important lessons. So what are the lessons that we can derive from this story? Most importantly, how can we apply them in our lives? 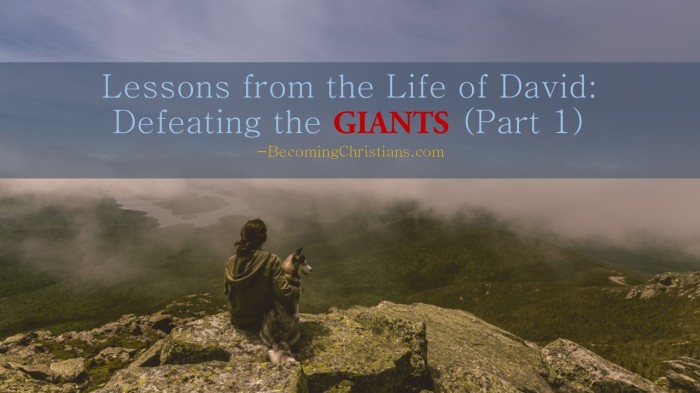 A stalemate in the Battle

The story of David and Goliath is found in I Samuel 17. The Israelite army was facing one of their greatest enemies, the Philistines. Their enemy invaded Judah and was now ready to wage war against the nation of Israel.

“The Philistines stood on a mountain on one side, and Israel stood on a mountain on the other side, with a valley between them” (I Samuel 17:3). This situation led to a stalemate. If one army attacked first, they had to go down the valley leaving them vulnerable to the army on top of them. Thus, for 40 days, it had been a war of words rather than a war of sword.

Goliath does most of the talking. Day after day, he mocked the Israelite army and their God. Goliath had an idea to conclude the battle once and for all. He issued a challenge. He said that the Israelites should choose a man who can fight him. If that man is able to kill him, the Philistines would be their servants (I Samuel 17:8-10).

This kind of arrangement, a one-on-one and winner-take-all challenge, has been a common practice in the ancient world. To avoid bloodshed and many people dying, a warring group could choose their champions and the winner will decide who wins the battle.

Goliath stood more than 9 feet! A height that would surely dwarf even the tallest basketball players today.

When the Israelites and Saul heard this challenge, “they were dismayed and GREATLY afraid” (verse 11). Using the human eyes, there are a lot of reasons for Saul and his army to be afraid. Goliath is a great and mighty warrior from his youth. He stood more than 9 feet! A height that would surely dwarf even the tallest basketball players today. He also carries an impenetrable armor. Anyone who will see him would surely shake and be afraid.

Saul is known to be the tallest in Israel. He is their leader and naturally, if anyone would accept the challenge of Goliath, it should no other than him. However, Saul is as scared as his followers.

An unexpected hero came to the rescue

Three of David’s brothers were part of the Israelite army. When David brought food to his brothers, he heard Goliath’s defiant mockery and insult to the Israelites. David is a courageous and brave young man who accepted the challenge of Goliath.

After David convinced King Saul, the fight between David and Goliath is about to commence. Goliath, as expected, was to continue his mindless insult. Confident in his own ability and armor, he taunted David and threatened him to be killed and give his flesh to the birds and beasts.

However, David fully convinced that God is able to deliver him from the hands of Goliath. He said:

“You come to me with a sword, with a spear, and with a javelin. But I come to you in the name of the LORD of hosts, the God of the armies of Israel, whom you have defied.  This day the LORD will deliver you into my hand, and I will strike you and take your head from you. And this day I will give the carcasses of the camp of the Philistines to the birds of the air and the wild beasts of the earth, that all the earth may know that there is a God in Israel. Then all this assembly shall know that the Lord does not save with sword and spear; FOR THE BATTLE IS THE LORD’S, and He will give you into our hands.”

These are not just a fancy and nice-to-hear speech from David. For David, there is NO DOUBT in his mind that God is able and is more than willing to help those who seek His help. David recognized that it was never been a battle between the Israelites and Philistines. It was a battle between God and the Philistine men!

David decisively won the battle. The Philistines were so shocked to see their champion fall. They have previously agreed that if the champion of Israel would win, they would be their servant. Perhaps, they have thought that no one can defeat Goliath, considering his size.

However, instead of serving the Israelites, they have fled and refused to be bound by the agreement they have initiated.

The inspiring story of David and Goliath should be a reminder that no matter what we are facing, we, too, can emerge victorious with the help of God.

As Christians, it is expected that we will face challenges and insurmountable trials (Acts 14:22). However, we are not to face these challenges alone. We must never EVER commit the mistake that we can overcome our spiritual battles against the giants without the help of God!

Like David, our confidence must never be placed on ourselves or any man. David showed us that God is the only reliable Source of strength and power. No one else.

We must never EVER commit the mistake that we can overcome our spiritual battles against the giants without the help of God!

The Philistines put their trust in their champion and they have awfully been disappointed. The Israelite army lost sight of the fact that God will fight the battle for them and they have been afraid for a very long time.

Pride, doubt, and fear are all enemies of faith. We have seen in the story of David and Goliath, how these enemies of faith can flinch and stun a Christian’s spiritual growth. We must always have the vision and look to God for deliverance.

Our confidence should be placed in God. Not in men.

Yes, some would trust in chariots. Some trust in horses. Some trust in their weapons. Others in their government, wealth, strength, and power. But this should not be the case for us, Christians. For we must not trust in anyone or anything else. We must trust in the name of the LORD our God (Psalm 20:7).

God is bigger than any of our failures.

The Israelites have also faced their giants before in the form of the Egyptians. When they are trapped in the Red Sea, when all hopes seem to be gone, Moses told them, “Do not be afraid. Stand still, and see the salvation of the LORD” (Exodus 14:13).

So let us just stand still and let God do great wonders and miracles. God can destroy any Goliaths in our lives. We can rest in His love and be at peace. For the battle is not ours, it’s God’s.