The Bible is filled with so many narrations of miracles and supernatural phenomena that defy the law of physics. These miracles are literally out of this world and most of the time, hard to believe. However, we can have the confidence that these miracles are really true because the Bible tells us so.

In this post, I have gathered some of greatest, awesome, unbelievable, and even inspiring miracles recorded in the Bible. I have selected the ones that are really mind-blowing and stunning.

Are you ready? Let’s begin!

1. The Creation of All Things

“In the beginning God created the heavens and the earth” (Genesis 1:1).

One of the greatest miracles in the Bible is the creation of all things. Imagine how POWERFUL God is! “Educated” people might dismiss this very fact and explain everything through theories – theories that need more faith to believe in than the faith needed to believe in the existence of God. It is quite sad how many people have spent their time, money, and energy to find the origin of this universe when the answer is in the Bible all along.

“For after seven more days I will cause it to rain on the earth forty days and forty nights, and I will destroy from the face of the earth all living things that I have made” (Genesis 7:2).

One of the most popular stories in the Bible is the Great Flood. It was the time when God “saw that the wickedness of man was great in the earth, and that every intent of the thoughts of his heart was only evil continually” (Genesis 6:5). Instead of letting man to continue hurting himself, God decided to wipe them all out and start anew with the family of Noah.

God promised that He will never send a flood again to destroy the earth and mankind (Genesis 15:15).

The Ten Plagues mentioned in Exodus 7-12 were sent to the land of Egypt to convince the Pharaoh to let the children of Israel go. Every plague sent by God were meant to be an insult to the gods of Egypt. For example, the first plague – Nile River turns to blood – was a strike to the Egyptian gods Knum, Hapy, Sodpet, Osiris, Edjo, and Hatmehyt.

This showed the Egyptians and Israelites and all those who heard the about the Ten Plagues that there is only one supreme and LIVING Ruler of the entire universe and that is God.

4. Parting of the Red Sea 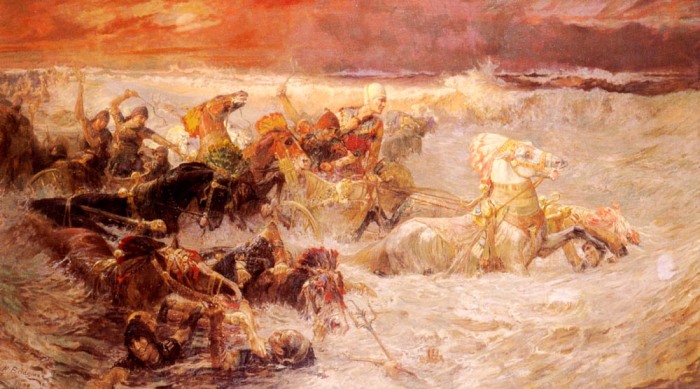 “Then Moses stretched out his hand over the sea; and the Lord caused the sea to go back by a strong east wind all that night, and made the sea into dry land, and the waters were divided. So the children of Israel went into the midst of the sea on the dry ground, and the waters were a wall to them on their right hand and on their left” (Exodus 14:21-22).

This Biblical scene was further made famous by the 1956 film “The Ten Commandments” by Cecil B. Demille. This is among the most breath-taking miracles recorded in the Bible. Imagine yourself standing on the coast of the Red Sea and see it parting. It would be something extraordinary to behold.

The miracle shows that God indeed can save His people no matter what the situation is. Even if there seem to be no way, GOD WILL MAKE A WAY.

So if you are facing your “Red Sea” right now, just “stand still and see the salvation of the LORD” (Exodus 14:13).

“So the sun stood still in the midst of heaven, and did not hasten to go down for about a whole day. And there has been no day like that, before it or after it, that the Lord heeded the voice of a man; for the Lord fought for Israel” (Joshua 10:13-14).

I believe this is something that is beyond our comprehension. Imagine, the rotation speed of the earth is about 1,040 miles per hour. If that is the case, what would be the consequences of suddenly stopping it? It would mean the destruction of the whole earth!

However, we can see here the supernatural POWER of God to stop the hands of time while not inducing the natural consequences of such action.

Truly, God is so powerful and since He is the author of the physical laws, He also have authority over it. How comforting it is to know that we have a God who are willing to fight our battles for us!

6. Resurrection of the dead

Now when He had said these things, He cried with a loud voice, “Lazarus, come forth!” And he who had died came out bound hand and foot with graveclothes, and his face was wrapped with a cloth. Jesus said to them, “Loose him, and let him go.” (John 11:43-44).

The resurrection of Lazarus was just among the many accounts of people rising from the dead in the Bible. Many people ridiculed Christ when He wants to see the dead body of Lazarus. However, all people who were there were amazed when they saw Lazarus brought back to life! This has led many people to believe Christ (John 11:45).

Though all the resurrection that had happened (except for Christ’s resurrection) in the Bible are just resurrection to a temporary life, there will come a time when all the servants of God who have ever died since the time begun will rise up and meet Christ in His second coming (I Thessalonians 4:16).

7. Feeding of the Multitudes 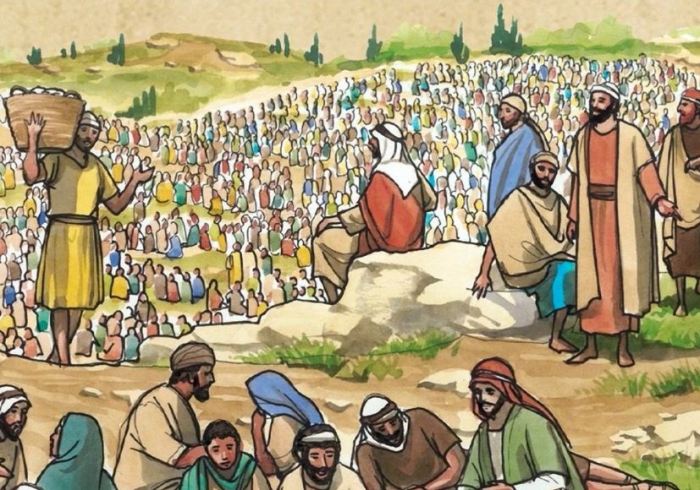 “Then He commanded the multitudes to sit down on the grass. And He took the five loaves and the two fish, and looking up to heaven, He blessed and broke and gave the loaves to the disciples; and the disciples gave to the multitudes.  So they all ate and were filled, and they took up twelve baskets full of the fragments that remained. Now those who had eaten were about five thousand men, besides women and children.” (Matthew 14:19-21).

This is another remarkable miracle in the Bible! Imagine only having five loaves of bread and two fish and you have to feed more than five thousand (or even ten thousand) people! What a miracle would that be if it would happen today. Admittedly, the disciples would have been puzzled when they realized that they were not running out of food.

The feeding of the multitudes shows us how powerful God is. No matter what will happen, God can provide us all our basic needs. He won’t even let the righteous beg for bread and be famished (Proverbs 10:3; Psalms 37:25). 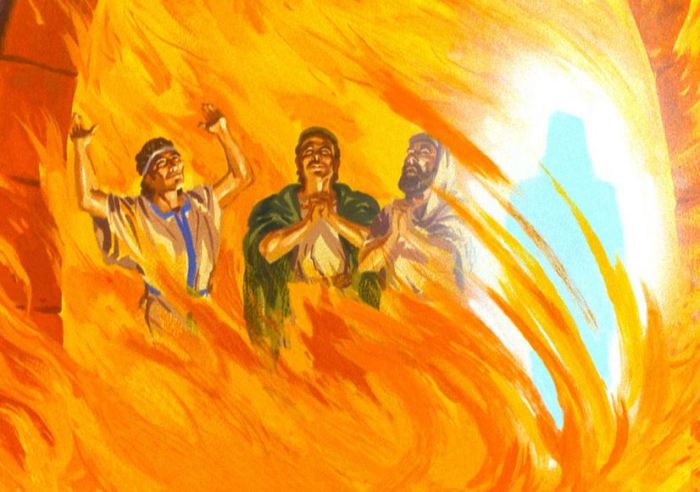 Daniel’s three friends were Shadrach, Meshach, and Abed-Nego. They were famous for not bowing before the gold image and disobeying King Nebuchadnezzar.

When brought before the King, Daniel’s friends were given the opportunity to compromise with their belief. To the dismay of the King, Daniel’s friends responded, “O Nebuchadnezzar, we have no need to answer you in this matter. If that is the case, our God whom we serve is able to deliver us from the burning fiery furnace, and He will deliver us from your hand, O king. But if not, let it be known to you, O king, that we do not serve your gods, nor will we worship the gold image which you have set up” (Daniel 3:17-18).

This made Nebuchadnezzar to be filled with great indignation and commanded to heat the furnace seven times! The furnace was so hot that the strong men who brought Daniel’s friends died. However, God delivered Shadrach, Meshach, and Abed-Nego! They were not hurt of the flame and even the smell of smoke did not cling to them! What a miraculous testimony of God’s protection to His people!

The story of Daniel’s three friends should encourage us that there’s no trial too great that we cannot bear. All we have to do is to stand strong on our ground and never compromise! God can do the impossible things! 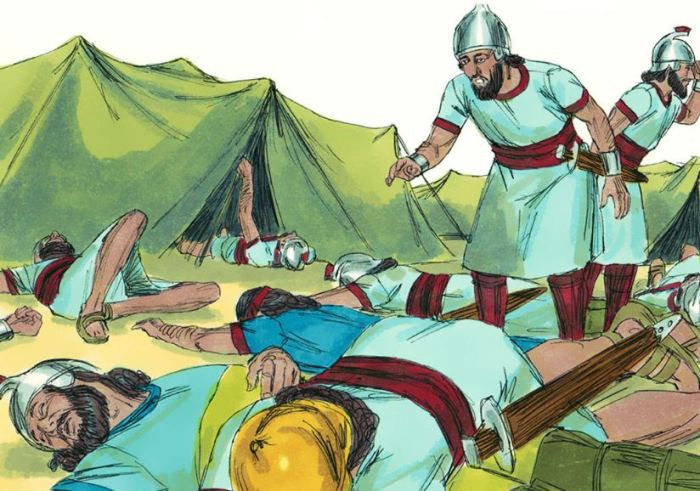 “And it came to pass on a certain night that the angel of the Lord went out, and killed in the camp of the Assyrians one hundred and eighty-five thousand; and when people arose early in the morning, there were the corpses—all dead. So Sennacherib king of Assyria departed and went away, returned home, and remained at Nineveh” (II Kings 19:35-36).

This is among the most dramatic events in the history of the Kingdom of Judah. Hezekiah was the current king and Assyria, the greatest power at that time, threatened to invade their land. Assyria had already conquered the Northern Kingdom of Israel and it was just a matter of time that they will also conquer the Kingdom of Judah.

Faced with this enormous threat, Hezekiah turned to God for help and God heard his prayer. This resulted in the death of 185,000 soldiers of Assyria, which was among the greatest defeats in its kingdom’s history!

Again, we need to make sure that we put our trust in God. He is our ultimate Defender!

10. Balaam and the talking donkey

Then the Lord opened the mouth of the donkey, and she said to Balaam, “What have I done to you, that you have struck me these three times?”

And Balaam said to the donkey, “Because you have abused me. I wish there were a sword in my hand, for now I would kill you!”

So the donkey said to Balaam, “Am I not your donkey on which you have ridden, ever since I became yours, to this day? Was I ever disposed to do this to you?” And he said, “No.”

Now, it is not every day that you find a talking donkey! This is surely a supernatural occurrence that we must take note of. If you were Balaam, how would you react to hear a donkey speaking to you? Now, it amazes me that Balaam responded like nothing special happened and yet, this is a mighty miracle that God can only do.

In this situation, God can use even a donkey to send his message to a person or a group of individuals. He could have talked through the clouds or whisper through the air. Nevertheless, He chose a donkey! I believe God is telling us that He can use anything to fulfill His purpose.

These are just some of the most remarkable and impressive miracles mentioned in the Bible. All these miracles should increase our faith that God is larger than life – that He can do impossible things. He is always in control and that fact should be more than enough for us Christians to put our trust in Him.

Indeed, we can confidently say, “I can do all things through Christ who strengthens me” (Philippians 4:13).