What is the thorn in the flesh? What purpose does it serve? Most importantly, what should you do about it? Those are the exact questions we will answer. Read on to find out more!

The thorn in the flesh is an expression used by the Apostle Paul to describe a persistent problem in his life. This thorn has caused great torment and prevented him from fully doing what he wanted to do. However, in the life of Paul, he has realized that there is a purpose why he has this thorn.

Perhaps, you also have a thorn in the flesh. You might have questioned God why He doesn’t take it away from you. The suffering you receive from this thorn might have overwhelmed you and pleaded to God to help you deal with it.

However, sometimes, divine intervention does not come. You prayed hard to God, but healing is not granted. A problem is not solved. You failed miserably in your life.

When God seems silent and his answer is no, what should we do? What is the right mindset that we should have in order to understand God’s purpose and ultimately, His plan in our lives?

There’s a PURPOSE for your thorn in the flesh in the same way that Paul’s thorn in the flesh had. Thus, it is vital that you know this purpose so you can take up a better perspective on how to look at life’s difficulties and challenges. 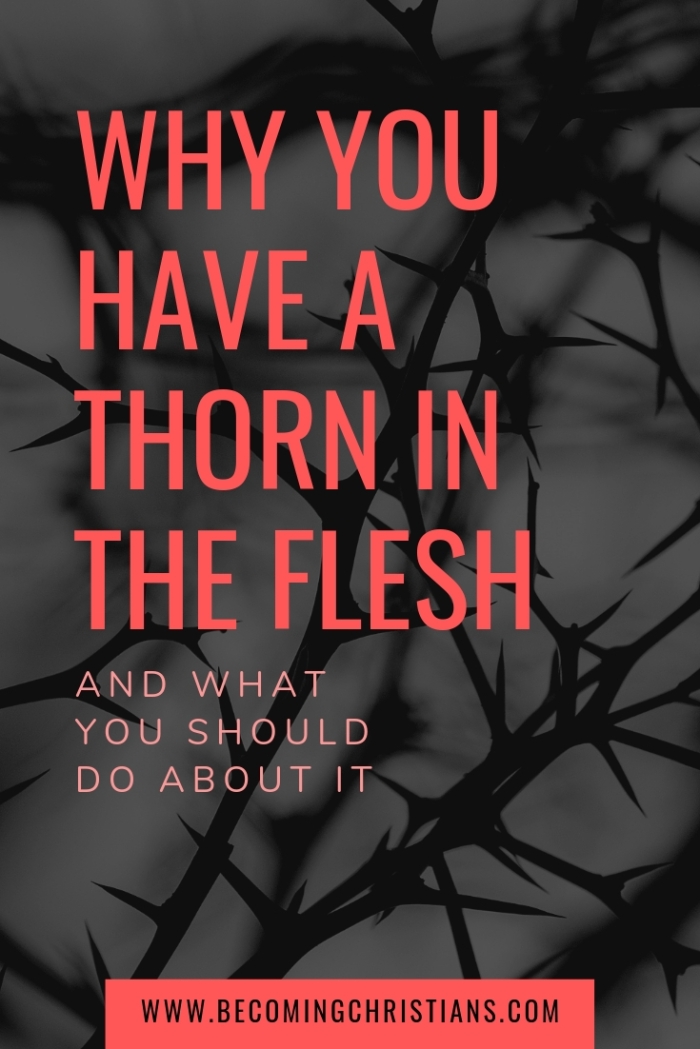 Your thorn in the flesh has a purpose.

The thorn in the flesh of the Apostle Paul

We read of Paul’s writing about his thorn in the flesh in II Corinthians 12:7-8:

Many people have asked, “What was Paul’s thorn in the flesh?” Many theories have been put forward to identify what this thorn of the flesh could be. Some of them are the following:

Moreover, the point here is really not what this thorn of the flesh is, but rather the purpose of the thorn.

Why you have a thorn in the flesh?

Here’s the number one reason why we have a thorn in the flesh. It is there to keep us humble and prevent us from being proud.

In the midst of torment and suffering, Paul recognized why he was given a thorn in the flesh, that no matter how hard he pleaded with God, it was not taken away from him.

Paul was no doubt one of the greatest followers of Christ. He was powerfully used by God to preach the Gospel to the Gentiles as well as to the Jews. We read of Paul’s background in Philippians 3 the following attributes:

Not only that, but in II Corinthians 12, we also read other privileges that he had experienced:

With a resume like this, Paul is fully qualified for any Christian job. He was even personally taught by Christ himself for about three years. He has every right to be proud!

I would even venture to say that Paul is naturally inclined to be proud because of his abilities and undeniable noble background.

Now, you can see why Paul was given a thorn in the flesh. It was given so that he will remain humble. The many privileges, revelations, and visions proclaimed to Paul could easily get in his head and become puffed up.

Naturally, Paul wanted to get this thorn removed. Just like any of us, we would prefer a life of comfort. If given the chance, we don’t want to endure pain and suffering. We would like to escape from it as much as we can. (To know the purpose of pain in your life, read this.)

That’s why we read in verse 8:

“Concerning this thing I pleaded with the Lord three times that it might depart from me.”

In Paul’s prayer, he could have come up with so many reasons for God to take away this thorn. Without the thorn, he could probably be more effective in his ministry. He could have reached more people, planted more churches, and even glorified God even better.

The thorn in the flesh working its purpose

However, God has a better plan. What was the response of God to Paul’s request? He said in verse 9:

“My grace is sufficient for you, for My strength is made perfect in weakness.”

Sometimes, the best way for God to help us overcome pride is to simply remove the source of our pride.

When we are proud of our health, what happens? We become sick. We say, I’m healthy enough and I can eat as many sweets as I want to eat or sleep as little as I can. I can go on as many weeks, months, or years without exercise and still I won’t get sick.

When we are proud of how much money we have, what happens? We lose our job. We lose money. We lose business opportunities.

When we are proud of the truth God has given us, God shows us how little we really know. We have become complacent with the truth given to us. We thought that it was the responsibility of our corporate church to teach us all the things we need to know. We don’t see the need to research for ourselves and even prove the doctrines that we have been taught throughout the years.

So, what happened? God took away that corporate church, shake it down to its core. Some have departed while others are lead to greater and more truths that we probably won’t know unless the sifting of the church happened.

For when I am weak, then I am strong

The point here is very clear brethren. When we are strong, when things are going according to plan, when everything seems to be good and smooth, we forget the need of God.

That’s why God said, “my strength is made perfect in weakness.” It means that when we are weak, that’s the time when God can manifest His true strength in us.

If a thorn in the flesh is what needed for Paul to stay humble, then that thorn is there to stay. For God, he puts more importance in Paul’s character development, rather than his comfort.

So, brethren, what are the thorns in your flesh? Could it be poor eyesight? A sore that does not heal? An enemy that vexes your spirit? Difficulty in walking? A physical disability? A child who has an incurable disease?

Whatever it is brethren, let God’s grace fill what you lack and let his strength be made perfect in your weakness. Rather than pitying ourselves, using our weaknesses as an excuse to break God’s commandments, or walk away from God, we must use our weakness as a reason to rely more and more on God.

When we finally see the need to endure a thorn in our flesh, we can confidently say in ourselves what the Apostle Paul wrote in II Corinthians 12:10:

Therefore most gladly I will rather boast in my infirmities, that the power of Christ may rest upon me.  Therefore I take pleasure in infirmities, in reproaches, in needs, in persecutions, in distresses, for Christ’s sake. For when I am weak, then I am strong.

My friend, don’t waste your weakness. Use it as a way to get closer to God. Don’t let pride get in the way between you and our Heavenly Father. When we finally see the reason for our thorn in the flesh, we now have a better perspective on how to handle trials and pain in our lives.