If you are most people who always watch the news, you know not a single day passes by without hearing a person committing a crime. According to a UN report, there are about 400,000 to 500,000 people murdered worldwide every day. Another report shows that in the UK, a crime is committed every five seconds. In our country, the Philippines alone, crime is so rampant that our President made a war on drugs, which he believes to be the primary root cause of the many crimes.

With all the suffering, economic cost, and societal burden of crimes, many suggest that it is only rational that a country should enforce death penalty or capital punishment. More and more people are now thinking of death penalty as a way to punish perpetrators and deter crime. However, other pro-life activists, groups, and churches denounce death penalty and look for alternative “humane” method of punishment.

In a world where everyone’s opinions seem to be at odds, where can we go for answers? Should Christians support death penalty and why or why not? Do Christians have the responsibility to oppose government policies about capital punishment? Most importantly, what does the Bible say about death penalty?

In this blog, let us examine the Word of God and determine what should be our attitude toward death penalty as individuals and Christians. Let us explore what God says about the death penalty and capital punishment. 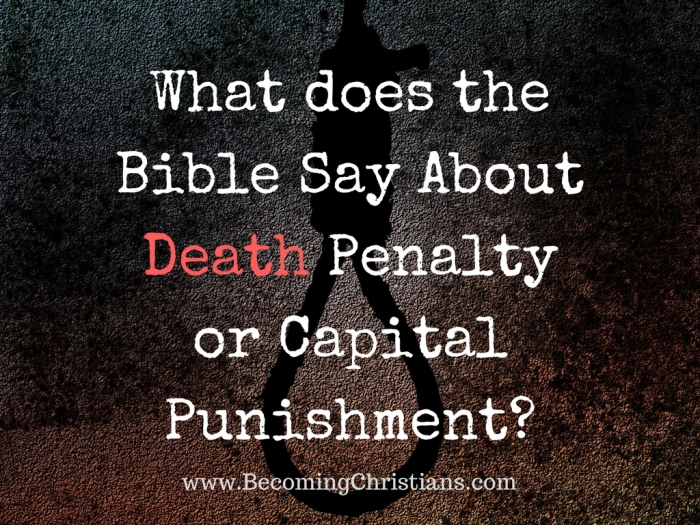 As we read the Old Testament, it won’t be long before you come across a scripture where God commanded certain people to die. In fact, death penalty is part of the civil law that He gave to Moses. Some of the most common crimes or acts that were punishable by death penalty are the following:

There were even instances when God commanded the Israelites to wipe out a whole nation (I Samuel 15:1-35; Deuteronomy 2:34).

With all these scriptures, isn’t it clear that Christians should support death penalty? While this might be the case, there are other considerations that we should have. After all, “As the heavens are higher than the earth, so are [God’s] ways higher than [our] ways and [God’s] thoughts than [our] thoughts” (Isaiah 55:9).

We need to remember that the nation of Israel is composed of carnal, UNCONVERTED, and worldly individuals. They didn’t have the Holy Spirit and only a select few have it. Since they don’t have the Holy Spirit, they can’t understand spiritual things. At their best, they can only keep the letter of the law and not the spirit of the law. This is the reason that God dealt with them in a purely PHYSICAL manner.

That’s why apart from the Ten Commandments, the spiritual and eternal law of God, He also added civil laws to govern the physical government of Israel. And some of the penalties included in the civil law is the death penalty.

In our modern times, the administration of death penalty seems to be too harsh. Imagine, killing a person for committing rape and murder. While it might be acceptable for some, but think about killing a person for being rebellious to their parents, committing homosexual acts, adultery, and prostitution. Isn’t death penalty too much of a punishment for these crimes? In our modern and “civilized” mind, we might think that God is harsh and His civil law was hopeless.

But reflect on how the civil law of God could have given swift justice to the oppressed and prevent the moral decay of the Israelite nation. To indelibly impress in the minds of His people the sanctity of life, the penalty for murder is death. To prevent rebellious children from damaging the society and the future of Israel, they were put to death when they are still young. To protect the sanctity of marriage and ensure that children will have a functioning family to nourish them, adultery was punishable by death.

Is death penalty too harsh? Yes, but this prevented a lot of bad things from occurring within the fabric of Israel’s society. OTHERS WOULD HEAR AND FEAR. Too many people today don’t fear the law of the land or God. They needed to be taught a lesson, and when the situation calls for death penalty, others would think twice before committing a crime.

We need to remember that God directly worked with the judges of Israel. We read that the judges were not judging for men, but for God (II Chronicles 19:4-7). God promised to be with these judges, and they were responsible to God alone. Whatever judgment they execute, it should reflect God’s standards.

For this reason, we can see that God was the one guiding these judges. These judges were acting under the authority of God. They were NOT to judge according to human reasoning, but according to God’s reasoning, law, and judgment.

Can you now see the benefit of God’s civil law and how it governed the Israelite nation? How efficient and fast was the punishment of evildoers! The Israelites didn’t have to pay taxes and spend plenty of resources just to keep convicts alive along with other hardened criminals.

Sometimes, we don’t understand God’s judgment, but we have the confidence that it is for the good. Consider the time when God commanded to kill all the Canaanites. God knew that it was better of these Canaanites to die than to continue in their evil and sinful ways. It is better to take their lives rather than let them continue to cause pain to themselves and others. However, the Israelites failed to follow God in this matter, and they had to endure long and arduous years dealing with generations of Canaanites that followed.

The purpose of death penalty

God included the death penalty in His civil law for many good reasons. These are the following:

So, can you now see the wisdom behind God’s civil law? There are good reasons why God instituted death penalty.

Therefore, we can see here that the administration of death was the execution of the penalties specified in the civil law of the Israelites.

“Why, then, was the law given at all? It was added because of transgressions until the Seed to whom the promise referred had come.”

Now notice, after Judah and Israel were scattered, they were no longer able to carry out capital punishment. There was no longer an organized civil government in Israel. By the time Christ came to the world, the Jews lived under the Roman rule. The timing was PERFECT! It is now the time for God to introduce the administration of Spirit.

God replaced the administration of death which only gave death for disobedience. HUMAN JUDGES COULD NEVER PROVIDE ETERNAL LIFE! They are only capable of passing a death sentence!

The Holy Spirit was made available for all of God’s people for the first time during the day of Pentecost AD 31. We read in Acts 2 how the prophecy came to pass.

The main difference between the physical Israelites and Christians today is the availability of the Holy Spirit. Now that Christians are given the Holy Spirit, they can now repent of their sins. Instead of incurring the penalty of sin which is death, we are now given the chance to obtain the gift of God which is the eternal life in Christ Jesus our Lord (Romans 6:23).

The civil law, along with its fines and penalties, was necessary for the unconverted Israelites. However, the civil law was only to last until the coming of Christ, which made the availability of the Holy Spirit to God’s people.

Submitting to the authority of civil government

God lets the worldly government maintain peace and order. They are there for us to live in peace. Romans 13:1-8 tells us that the “authorities that exist are appointed by God” and we must be “subject to the governing authorities.”

The Bible reveals that God has turned over the task of ruling societies today to governing bodies. They are to rule over the unconverted people of this world until the return of Jesus Christ.

As Christians, it is not in our best interest to be part of this world’s government and politics. Rather we are commanded to pray for our world leaders and rulers (I Timothy 2:1-2). It is not our responsibility to directly influence the government to enforce death penalty or not. The men in the government are accountable to God. They are answerable to God whether they use the power of their office properly or not.

There is a far greater issue that we must be concerned with as Christians than the issue of death penalty. The Bible reveals that there is a worse punishment for Christians who willfully break God’s commandments. We read:

“If we deliberately keep on sinning after we have received the knowledge of the truth, NO SACRIFICE FOR SINS IS LEFT,  but only a fearful expectation of judgment and of raging fire that will consume the enemies of God” (Hebrews 10:26-27).

So instead of spending our energy and time overturning government decisions and civil laws, it is better for us to concentrate on developing Godly character. We need to heed the words of the Apostle Peter, “REPENT and be baptized, every one of you, in the name of Jesus Christ for the forgiveness of your sins. And you will receive the gift of the Holy Spirit” (Acts 2:38). By doing so, we will obtain the promise of eternal life and not the penalty of sin, which is death.

Joshua Infantado works as an online freelance writer. Aside from motivational speaking, writing about God’s way of life and truth is among his passions. He has authored two eBooks, The Power of His Word and The Eleventh Chapter of Hebrews.