Davao is the hometown of our newly elect President Rodrigo Duterte. A few hours later, the President declared a “State of Lawlessness” to heighten the security level in our country.

On the morrow, Saturday morning, the Abu Sayyaf Group claimed responsibility for the attack. This is a spineless attack of the bandit group after the Philippine government declared an all-out war against them. 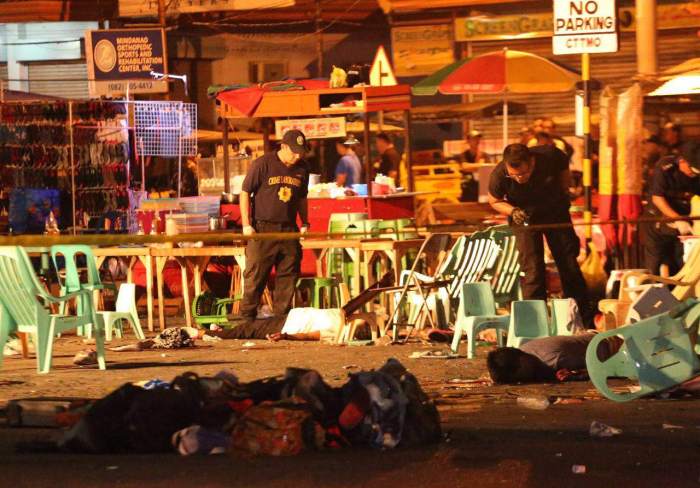 When terrorism hits closer to home

Terrorism seems to be so unreal for many of us who only have heard about it from a distant land. When we hear of a terror attack being perpetrated in other countries, we might just feel a little sympathy and even apathy.

The Blast in Davao City is different. As I watched videos and scanned photos of the explosion scene, I felt sad that this horrific carnage has happened in my beloved city. I have walked the street where the blast happened. I have shared fond memories with my friends and loved ones on the same spot of the explosion. I have enjoyed hearty meals, shared laughter, and said goodbyes on the street of Roxas Boulevard.

Then, the thought hit me: it could have been any of us.

Terrorism is almost impossible to stop. It could happen anywhere, anytime. No one is sure when the next explosion will occur. Even if the police scatters information about the terrorists’ next attack, it does not give us a guarantee that we will be spared.

The terrorist group has said that the Davao bombing will not be the last, but rather the beginning. The Philippine government will not flinch as well and will continue its offensive attacks in the jungles of the southern part of our country. So we expect more bloodshed to happen.

As Christians, what should be our response?

We need to cry and sigh not just for our country but the whole world. The Davao bombing is the only one of the many terrorist attacks that have been happening around the globe. My heart goes out to all the families who have been directly affected by this horrible crime against humanity.

We don’t know where the next attack will happen, but one thing is for sure; there will be more like this as we approach the end time. Bible prophecies reveal that things will get worse before they become better.

We really don’t have any guarantee that we will still be alive tomorrow, the next week, next month, or next year. I am sure those who have been killed didn’t have any idea that they will die that evening. This is the main reason that we must set the right priorities in our lives. Unless we set our priorities right according to the Bible (Matthew 6:33), we might still be living in vain. All the toil and labor we have done can come to nothing in just a blink of an eye.

This is the main reason that we must set the right priorities in our lives. Unless we set our priorities right according to the Bible (Matthew 6:33), we might still be living in vain. All the toil and labor we have done can come to nothing in just a blink of an eye.

Jesus/Yeshua said, “Now when these things begin to happen, look up and lift up your heads, because your redemption draws near” (Luke 21:28). The senseless violence we see around us MUST motivate us to seek a closer and more intimate relationship with our Creator. After all, God is our Ultimate Defender. Let us all place our trust in Him. Prayer is among the greatest weapons we can use during this gloomy episode in our country.

Above all, this world badly needs Christ’s second coming; so let us all pray, “Thy Kingdom come!”

One thought on “News About Davao Bombing: It Could Have Been Any Of Us”