Many people consider Jesus Christ as one of the ideal leaders who have ever lived. He is the most influential figure in human history, and his impact is still with us today. As this might be the case, He is also a very controversial leader, and many think that He is nothing but a mere man who managed to create a huge following.

With all these in mind, it is interesting to ask this crucial question: could Jesus be elected president? If He is physically present among us today, will people unanimously vote for Him? Well, the surprising answer would be, NO!

In this post, let me share with you eight reasons Jesus will not win a presidential election. 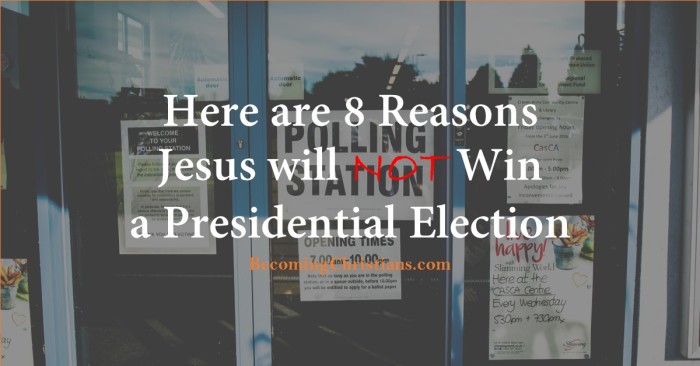 Reason no. 1: Jesus will not tolerate sexual immorality

Most people don’t want anyone telling them what to do. The majority of this world’s government do not have a law against all forms of sexual immorality. Christ would create a law that punishes the sin of fornication, pornography, homosexuality, and cohabitation.

Reason no. 2: Jesus will not tolerate worldly entertainment

If we look around us, our modern entertainment is filled with violence, illicit sex, witchcraft, horror, bloodshed, and other elements of evil. Christ will control the content of books, music, movies, and television so that these forms of entertainment will conform to God’s standard of morality.

Reason no. 3: Jesus will not tolerate abortion

Most “educated” people would fight hard for their perceived rights. They deemed that they have the right over their bodies, and it is up to them whether they can have an abortion or not. Jesus will immediately abolish this modern-day child sacrifice to the god of convenience.

Reason no. 4: Jesus will not tolerate pagan holidays

This might come as a surprise to many but most of this world’s “Christian” holidays are not rooted in the Bible. In fact, they have pagan origins. These types of holidays don’t have any place in the government of Christ. After all, He calls these pagan rituals and festivals as “abomination.” These pagan holidays include Christmas, Easter, Halloween, Valentine’s Day, and others.

Instead of pagan holidays, Jesus will advance God’s Holy Days listed in Leviticus 23. These Holy Days are the same Holy Days that the first-century Christians observed, and these will be kept even during the millennial reign of Christ.

Reason no. 6: Jesus will require all people to keep the seventh-day Sabbath

Even if you read the Bible, from Genesis to Revelation, you will NOT find a single scripture that transfers the sanctity of seventh-day Sabbath on Sunday. Though the majority of Christianity are Sunday worshipers, they will be forced by Christ to observe the Sabbath day.

Reason no. 7: Christ will impose His religion to people

Today, we have the freedom of religion and others would even want to have freedom from religion. But if Christ would be president, He will install a government that is founded on Biblical principles, and these include establishing the TRUE religion.

We see a lot of religious beliefs. Even in the Christian world, we find the division of churches and their contradicting views – all claiming to have the truth. If Christ rules the land, there will only be one truth, and He will make it very clear to all His people.

Reason no. 8: Christ will ultimately change the constitution of the land

There is no single Constitution in this world that COMPLETELY and PERFECTLY embody the law of God. Jesus will not bring a new law because a perfect law already exists and that is the Law of His Father.

Humans, even with the best and purest intention, will not be able to create a law that reflects the intent and purpose of God. Christ will establish a law and constitution that are geared towards the fulfillment of human potential.

His government is not about getting rich and accumulating worldly wealth. The law of Christ will not just teach people how to live this life, but it will prepare them to become the future sons and daughters of God!

Will Jesus be a President?

By this time, the obvious answer is no. Many will be offended by Christ’s platform. Many atheists would not vote for Him. Even so-called Christians will hesitate to vote for Him because the majority of Christians today are “living under grace” and do not see the need to keep the commandments of God!

Thankfully, Jesus will rule this entire world whether we like it or not. It not through voting that He will be elected as the King of Kings and Lord of Lords. It will be by FORCE. Man is not designed to rule over another man. Human government will ultimately fail, and if nothing is done, we will all perish.

Before we completely annihilate the human race, Christ will finally intervene and save us from ourselves. Together with His saints, He will rule forever and ever and will install the perfect government that will bring lasting peace, prosperity, and life to this world!