Do you really understand what the Bible means when it says, “You shall not steal?” Believe it or not, you probably have violated this commandment in many ways you didn’t know. In this blog, let us read the different ways people are breaking the Eight commandments.

The eighth commandment tells us:

Those four words may seem to be a simple command, but it comes with deep and far-reaching implication. The eight commandment is open-ended. It does not specifically tell us what to steal.

You shall not steal what?

As simple as this commandment might look like, there are a lot of things you need to learn. For many people, the eighth commandment is simply a commandment protecting one’s property. However, we know that if you are just keeping this commandment to the letter, you are missing the whole point.

Jesus Christ or Yahshua the Messiah came to the world not to destroy the Law or the Prophets, but he came to fulfill it (Matthew 5:17). He magnified the law and explained that keeping the letter of the law is not enough.

Thus, He went on to explain the spiritual application of laws of God (Read Matthew 5:21-48).

For this reason, we need to take a look at how we are unknowingly breaking the Eight Commandment. You might have not stolen anything, but you might be as guilty as committing the things listed on this blog.

So, let’s take a look at the ten ways you might be violating the Eighth Commandment. 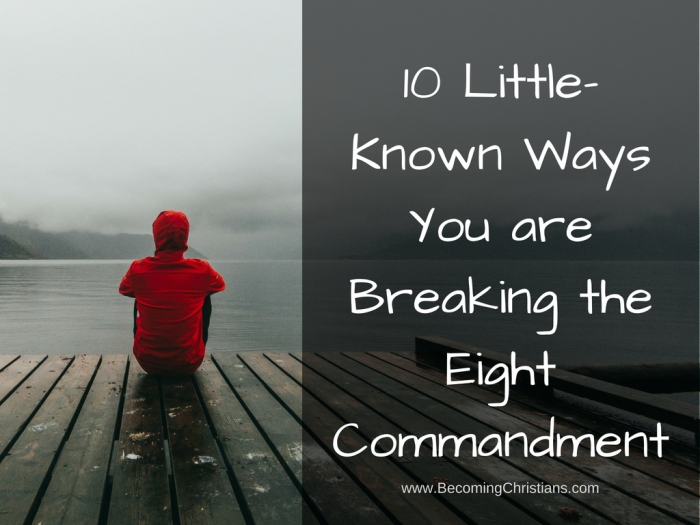 For many consumers, they want to save money as much as possible when buying new products. However, many of us have taken the wrong path of frugality.

According to one estimate, counterfeit products have cost the global market of about $250 billion. This means that legitimate businesses and manufacturers have lost a lot of money due to piracy and when this happens, many jobs can also potentially be lost.

To set the record straight, it is illegal to manufacture and sell counterfeit products, from pirated DVDs to designer bags.

Imagine if you are in the shoes of these legitimate businesses. How would you feel that the product that you have meticulous and painstakingly designed would only be stolen by others through the form of fake products? If it sounds unfair, it probably is.

Now, here’s where it gets darker. Most counterfeiters don’t pay taxes. They hire children to produce their products, violating child labor laws and human rights. Worst of all, these fake manufacturers might even support organized crimes!

Now, I hope you now see the importance of avoiding fake and pirated products. You might have saved for a moment, but think about how this is affecting the economy and how you potentially support illegal activities.

In schools where students are infected with the “every-one-is-doing-it” mentality, it seems that cheating and plagiarism has become the norm.

When I was in high school and college, cheating is tolerated. Sometimes, it is even glorified. The student who can cheat without getting caught is glamorized in our school.

If you try to tell the teacher, your classmates will hate you and you will even lose some friends by doing so.

I make it a point that my friends know my principles. I tell them beforehand that if I see them cheating, I will tell the teacher whether they will like it or not. And they respect my stand.

I believe if you are just firm and would not compromise, they will respect you. Of course, this is easier said than done. However, as Christians, we are not called to do the easy thing, but we are called to do the right thing.

Cheating can be a precursor of greater sins in the future. No wonder that the Philippines is considered to be one of the most corrupt countries in the world. In schools alone, they can’t even discipline students who are cheating. Now, think about the time when they will finally finish college and start working.

Cheating is indeed a form of stealing. It steals the time, energy, and knowledge of your classmate. It seems to be a shortcut to getting a better grade, but the truth is, you are also cheating yourself.

Yes, it is true that there are really free software programs and applications from the Internet. However, there is also a lot of software for sale that you can use without paying for it. The use of crack codes and hacking techniques are so common that people seem to be callous with this type of stealing.

Now, businesses, individuals, inventors, artists, and designers lost millions and even billions because of illegal downloads. Not only that, but millions of jobs have been lost due to this form of stealing.

If this isn’t considered breaking the Eighth Commandment, I don’t know what you will call it.

Point no. 4: Downloading movies or music

This probably is the most difficult to avoid. I, too, admit that I am guilty of this. With the use of torrent software, we can easily download movies or music without paying for it.

According to one study, global music piracy causes more than $12 billion of economic losses per year. This also results in more than 70,000 jobs being lost, $400 million plus in tax revenues, and about $3 billion in workers’ earnings.

On the other hand, movie piracy also costs the industry between $3-4 billion. Movie piracy is also considered to be one of the leading causes of bankruptcy and loss of income for many movie producers and artists.

Point no. 5: Goofing around during work hours

You can steal time and money from your company without even knowing it. The moment you do things that are not related to your work or you have no permission to do so, it is deemed as stealing since you are paid to perform a work.

Gossiping can also be considered as stealing.

When you gossip, you steal other people’s reputation, especially when you do it deliberately to destroy them. Gossip, libel, and slander are more destructive than stealing a physical property. Once you destroyed the good name of a person, it cannot be FULLY restored anymore.

Gossipping can steal peace and friendship and those are just some of the things that gossip can destroy. If you want to avoid breaking the Eighth Commandment, then you must avoid gossiping.

(Also read: How to effectively overcome the sin of gossiping.)

Cyber-bullying is in this category as well. Public humiliation steals people’s dignity and confidence.

Most ads on TV, newspaper, and other media seem to be driven by money-making to the point that they don’t see it is wrong to add a little lie in their ads. Exaggerating their good points, while downplaying or omitting their bad points are some of the ways sales agents make money.

Deceiving people just to convince them of buying your product or hiring your service can be considered as stealing.

Point no. 9: Not giving tithes

God commands that we should tithe to sustain the work of the Church. Not tithing is equated to robbing God.

Point no. 10: Not keeping your word

Lying steals people’s trust. One good example is when you proclaim insincere love for another person just to acquire their wealth, body, love and trust.

Of all the Ten Commandments, it is the Eighth that is open-ended. It doesn’t specifically mention what not to steal. In fact, the Eighth commandment has an over-arching implication on other commandments.

The Eighth Commandment is also telling us not to steal the honor of your parents, the life of innocent people, our neighbor’s spouse, truth and justice, and other people’s property through coveting – things that other commandments cover.

Imagine a world where people just keep the Eighth commandment. We won’t need padlocks; we won’t need security guards; we won’t need walls to protect our property; you can leave your things in public places; you won’t need to put a password on your computer; and so many wonderful things.

In short, even just keeping the Eighth commandment can make this world a better place to live in.

God’s commandments bring life. They support the advancement and prosperity of a civilization.